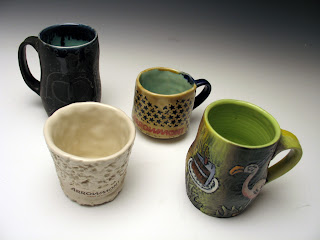 These are four of about 180 cups that were made during Arrowmont's AIR 20th Anniversary reunion earlier this month.  Now when you come to Arrowmont, you can drink your coffee or tea out a real handmade mug.  This project produced some knockout cups!  Real gems, I tell you.  It was difficult to pick four to photograph.  I believe these selected lovelies were made in collaboration by Erin Castellan, Phil Haralam, Joe Gower, Jason Bige Burnett, Meagan Gumpert, and Bryan Hiveley.